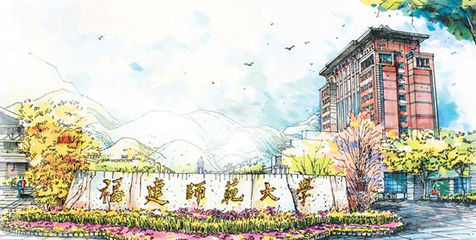 Fujian Normal University (FNU), a century-old university based in Fuzhou, a historic cultural city known as “Land of Culture on the Coast”, is a time-honored and well-acclaimed provincial institution of higher learning. Founded as Fujian Superior Normal School in 1907 by the famous late-Qing scholar Chen Baochen, who once served as the teacher of China’s last emperor, the present day FNU went through a few changes—merging with the former Hwa-Nan Women’s College of Arts and Sciences, Fukien Christian University and Fujian Provincial Teachers School respectively—to form Fujian Teachers College in 1953. In 1972, the University was renamed Fujian Normal University and has been thus referred to since then. In 2012, the Ministry of Education and Fujian government began to jointly support the development of the University. FNU was designated as provincial high-level university for prioritized construction in 2014 and as provincial first-class university in 2018.

The vicissitudes in its century-old history notwithstanding, a fine scholarly tradition has been inherited and sustained by generation after generation of its faculty and students. FNU is proud to count among its teaching staff quite a few internationally renowned scientists and men of letters, including Ye Shengtao, Guo Shaoyu, Dong Zuobin, Lin Lanying, Zheng Zuoxin, Huang Weiyuan, Tang Zhongzhang, Tang Chongti, and Yao Jiannian. A traditional and innovative commitment to academic excellence by its teachers and students alike, unswerving even at times of trials and adversities, has given rise to a distinctive ethos embodied in FNU’s motto–To Know and to Act, with Devotion and with Aspiration. Inspired by its pledge to always “teach earnestly, study diligently, seek truth and promote innovation,” the University has been forging ahead and making remarkable achievements, including winning the title of “National Civilized Institution”, “National Civilized Campus” and other high-level titles and honors. As you sow, so shall you reap. Since its establishment, FNU has graduated over 500,000 of students talented at various levels and of diversified types, thus making a tremendous contribution to the economic and social development of the province and the country.

Currently the University proper consists of two campuses: Qishan and Cangshan, with a total land area of about 260 hectares. FNU offers 87 undergraduate programs (77 of which enrolled students in 2020). Currently there are over 23,000 full time undergraduate students, over 7000 graduate students of various types, and 1800-strong teaching and auxiliary staff on the main campuses. Its faculty counts 59.06% full or associate professors and 60.01% doctorate degree holders. The honorific titles and recognitions received by such a pool of excellent talent include one member of the Eurasian Academy of Sciences, three adjunct academicians, and nine scholars selected by Ten Thousand Talent Program (Program of Global Experts), four professors and three young scholars sponsored by Changjiang Scholar Awards, eight by National Science Fund for Distinguished Young Scholars (including overseas) and seven by National Excellent Youth Science Foundation, three members or conveners of the subject-specific advisory groups under the State Council Commission for Regulating Academic Degrees, one convener of the Expert Panel of National Post-Doctor Regulatory Commission, nine state-level young experts of outstanding achievements, eight faculty members selected by the New Century Talent Project, one “Huang Danian Style Research Team”, three state-level excellent teaching groups, two “Distinguished Teachers”, five “Celebrated Cultural Experts”, one “Leading Talent” of Youth Science and Technology Innovation under the Ministry of Science and Technology, two innovation teams under the Ministry of Education, 17 faculty members supported by New Century Excellent Talent in University, and 133 scholars of State Council Allowance throughout the years.

The focus on cultivating morality and integrity for professionals and the endeavors in a further education reform have translated into a constant upgrading of teaching and research. FNU has been rated A in the undergraduate teaching evaluation conducted by the Ministry of Education, winning 17 first or second state-level prizes for achievements in teaching over the years. 26 of FNU-compiled textbooks have entered the list of teaching materials in the major national-level development program. Other state-level recognitions include two comprehensive pilot reform programs; ten “programs with distinct features”; 18 “first-class national undergraduate construction programs”; 28 courses respectively designated as “best-designed courses”, “best resource sharing”, “best video demonstration”, “best bilingual demonstration”, etc.; eight (virtual simulation) demonstration centers for pilot teaching; four innovative pilot zones for talent training modes; and one education project for outstanding teachers；and being selected as one of the universities to implement the Outstanding Secondary School Teachers Fostering Plan of the Education Ministry.  The College of Marxism of FNU is one of China’s major institutions of Marxism. FNU also runs four personnel training bases: one for state-level talent, one for university counselors, one for teachers of ideological education and one for teachers of vocational schools in the priority list of the Ministry of Education. In the Challenge Cup and other competitions, FNU students are remarkably successful, winning Grand Prizes, Gold Prizes, and First Prizes, to name just a few. Three of their doctoral theses have been selected into China’s Top 100 outstanding doctoral dissertations.

Bringing into full play the leadership role of its well-established disciplines, an academic arrangement has been structured of first-rate Art, advanced Science, and featured Engineering. A balanced and coordinated development of this wide spectrum of disciplines has given FNU a distinct identity as a multi-disciplinary comprehensive university. Academic programs cover 11 subject areas in literature, history, philosophy, physics, engineering, pedagogy, economics, law, business management, agriculture, and art. The University has one state key discipline, nine provincial peak disciplines, 13 plateau disciplines, 18 post-doctoral research centers, 21 primary discipline doctoral programs, 34 primary discipline master programs, and 19 professional master programs. In the fourth-round national evaluation of university disciplines, 3 of the FNU disciplines entered Class A and another 12 were listed Class B, ranking first both in the number of Class-A disciplines and the number of Top-Class disciplines in Fujian Province. In the national spectrum, FNU is tied for 45th place in Class-A disciplines.

Aiming high while keeping a firm foothold, FNU vigorously promotes collaborative innovation in its scientific research. A new research center of political economy on socialism with Chinese characteristics will soon be established—one of seven in China. At the state level, FNU has a key lab cultivation base, an engineering research center jointly supported by the state and the provincial governments, and one “2011” collaborative innovation center (as one of the core collaborators); at the ministerial and provincial levels, there are 95 platforms for scientific research such as national key labs, engineering research centers, as well as research bases for humanities and social sciences. Altogether FNU researchers have won nearly 820 awards and prizes, of which 18 are the three most prestigious national awards (i.e., the State Science Award, the State Technological Invention Award, and the National Science and Technology Progress Award), four first prizes for outstanding achievements in researches of humanities and social sciences in universities, and one first prize in natural science. In the past five years, among the almost 500 state-level projects of various types and over 3,000 other projects undertaken by FNU researchers, 12 are major programs sponsored by the National Social Science Foundation or key programs of humanities and social sciences research supported by the Ministry of Education, three academic works have been selected into the achievement library of national social sciences, and one other has been collected by the China Academic Library for translation into foreign languages. Meanwhile, taking advantage Fujian’s position as a core area of the newly proposed 21st-Century Maritime Silk Road, as one of China’s pilot free trade zones, and also as a national ecological civilization zone, FNU makes full use of its research achievements in the economic and social development by collaborating with enterprises, facilitating the commercialization of research findings in various ways. FNU has also developed a number of think tanks featuring the region and the university, which come through as FNU’s “strategists” on major practical issues.

The 21st century Maritime Silk Road Initiative and Fujian’s adjacency to Taiwan, Hongkong and Macao gives FNU an edge in the development of its international exchanges and cooperation. So far the University has established friendly and cooperative relations with more than 110 universities and institutions in the USA, UK, Australia, etc. and with UNESCO. Real cooperation with over 40 universities in Taiwan have been launched as well. Teaching Chinese as a foreign language is another proud achievement FNU has made in recent years. To date 954 volunteers in 17 groups have been sent to 26 countries (the Philippines, Indonesia, Thailand, Vietnam, etc.), two Confucius Institutes established in collaboration with the Angeles University Foundation of the Philippines and Al Azhar Indonesia University respectively, and one Confucius classroom opened with the Boston Renaissance Charter Public School, USA. These projects have greatly promoted FNU’s prestige at home and abroad, one indicator of which is the visit President Xi Jinping and other state leaders paid to its Confucius Institute in Al Azhar Indonesia University on their tour to the country.

FNU publishes a long list of scholarly journals, including The Journal of Fujian Normal University (the humanities and social sciences edition), The Journal of Fujian Normal University (the natural sciences edition), both are designated as “core periodicals published in Chinese”. The former edition has been listed as one of the “journals of renowned columns” by the Ministry of Education and the source journal of Chinese Social Sciences Citation Index, while the latter has been selected as one of China’s “core periodicals in science and technology” and the source journal of Chinese Science Citation Database. The FNU library, one of China’s ancient book protection centers, holds a collection of 4 million paper books and nearly 3 million electronic books. Whereas the number marks it out as one of the largest libraries in normal universities throughout China, the FNU library is famed internationally for its impressive collections of ancient texts, rare books, rubbings of engraved tablets, calligraphic works and paintings, Fujian’s local cultural and historical documents, early editions of foreign language publications, and major newspapers published during the historic period known as the May Fourth Movement. The University boasts sophisticated and extensively-applicable internet facilities and complete wi-fi coverage, and, to provide for various sports games, training, as well as for fitness, a number of state-of-the-art and well-equipped stadiums and sports fields. Affiliated to FNU, there are one branch college (in Fuqing City), one high school and one elementary school. The Affiliated High School of FNU is acclaimed in the province as the holder of the greatest number of International Science Olympiad medals.

The chapter of 113 spectacular years has just been turned over. Upholding its principle of morality and integrity for professionals, FNU is now devoted to implementing a comprehensive reform broadly, promoting a connotative development widely, and enhancing the school quality extensively. The University is taking giant strides forward, in order to be upgraded into a higher level comprehensive university with distinct features, to make further contribution to the development of Fujian province, building it into a region of flexible mechanisms, advanced industry, affluent people, beautiful ecology, and, in turn, to play a part in realizing the China dream—the great rejuvenation of the Chinese nation.