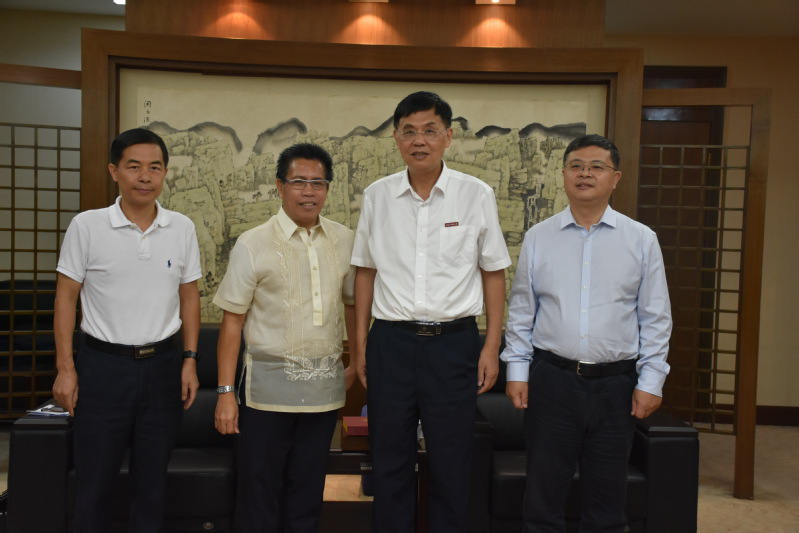 On October 11, Li Baoyin, Secretary of FNU Party Committee, met with the delegation, led by Fu Xinwei (Julius Caesar Aragon Flores), the Consul-General of the Philippines in Xiamen, at the meeting hall of Shao Yifu Building on Cangshan Campus, and heads of the Office of International Cooperation and Exchange, and Soledad College of FNU, and some Filipino students attended the event.

On behalf of FNU, Li cordially welcomed the visit of Fu Xinwei and his delegation, and briefly introduced the history, scale, discipline development and international education of FNU. Li pointed out that FNU has a long history of cooperation with the Philippine government, universities and social institutions in education and scientific research, and has made positive contributions to promoting China-Philippines friendly exchanges. Li said that at present, the exchanges between China and the Philippines are increasingly extensive and deepening, creating more favorable conditions for the cooperation and exchanges between FNU and the Philippines. Under the care of the governments of China and the Philippines and with the support of Mr. Xu Mingliang, a Filipino alumnus, FNU Soledad College has been established to provide postgraduate education for Filipino students, Li said, adding that FNU will offer preferential support in terms of policies, funds and management personnel, to accelerate the construction of the comprehensive building for postgraduate teaching and research on Qishan Campus, and will strive to provide a better learning and living environment for international students including Filipino students.

After the talks, the two sides exchanged gifts and visited representatives of Filipino students on Cangshan Campus. Fu xinwei and his delegation also had dinner with the international students in the canteen, learned about their study and life on the spot, and encouraged them to study hard and make more contributions to strengthening the friendly exchanges between China and the Philippines.