FNU Holds Commencement for the Class of 2022

The graduation ceremony was held at the East Athletic Field on Qishan Campus on the morning of June 20th. FNU leaders, heads of departments and divisions, Party and government leaders of all the colleges, faculty representatives, the counselors of the graduating class and all the graduates from the class of 2022 attended the event. The ceremony was presided over by Tu Rong, Deputy Secretary of FNU Party Committee.

FNU President Wang Changping, centering around “Forging ahead with patriotism and devotion”, shared with all the graduates his three reflections. Firstly, it is important to remain mindful of the country’s most fundamental interests and be strivers who love the Party and the country. He hoped that all the graduates will be good inheritors in sustaining the Party’s revolutionary legacy, shoulder responsibilities, integrate themselves into the Party and the country, use their talents in the great cause of serving the Party and the people, and work hard where the Party and the people need them most, to let their youth shine brilliantly. Secondly, it is essential to be enterprising and be forerunners who learn more and think more. He hoped that all the graduates, whether in school for further study or in the workplace, whether in good or bad times, will take learning as the eternal theme of life, keep curious about new things, continue to acquire new knowledge, gain new insights, and win the initiative, advantages and the future in seeking knowledge and progress. Thirdly, it is vital to advocate and cultivate morality and be dedicators to kindness and advancement. He hoped that all the graduates will always take “advocating and cultivating morality” as the foundation of their lives, upholding the great virtue of loyalty to the Party, the social morality for the benefit of the people, and the virtue of strict self-discipline. He also hoped that they will constantly refine their virtuous personalities, lay a solid moral foundation, and consolidate the basis of moral conduct, so that they will live a more promising and more fulfilling life.

The degree awarding ceremonies were held at the Assembly Hall, the Academic Lecture Hall and the Youth Theater on Qishan Campus. Pan Yuteng, Wang Changping, Chen Xiaohong, Tu Rong, and Chen Qinghua, the leaders of FNU, turned the tassels for the graduates, and took photos with them. 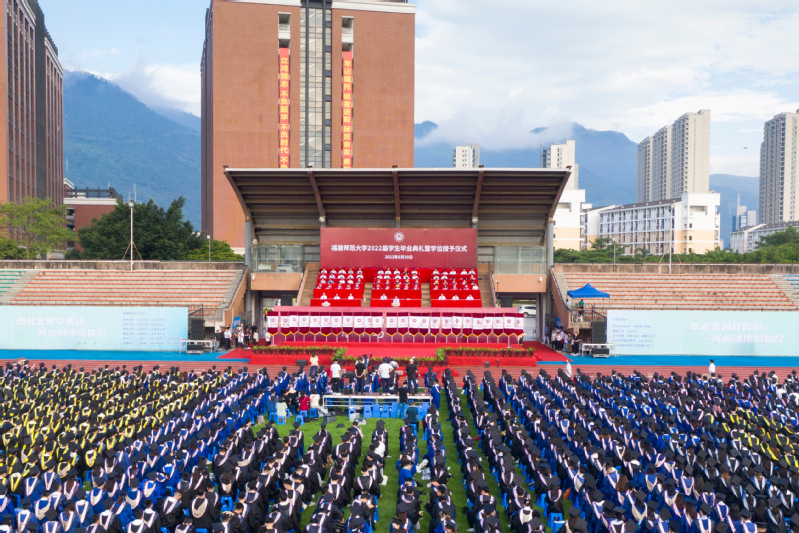